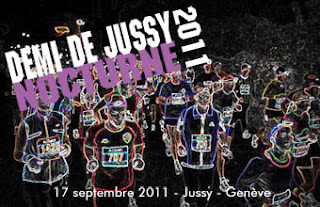 So. Here we are, the 3rd of September, just a couple weeks before what would have been my first half marathon: the Demi de Jussy, a run in the middle of the night through a small farming village called Jussy, just on the outskirts of Genève.

Before I get more into that, I think I should provide a little background information on my running history. To put things simply, I HATED running. Detested. Loathed. Despised...all those "hate" synonyms. All throughout high school the best I could do was at most the 100m hurtles (wait, are they 100m? I don't even know). Though I was good at them, they were no fun. And good lord! Having to run the mile in gym class was absolute torture. Fast forward a few years to Hawaii...After hearing about all these marathons like the Honolulu Marathon, the Ironman in Kona, or the HURT 100, I couldn't help but feel a pang of jealousy: I wanted to be able to do that too! *Insert whiny voice here*

Though I used to hate running, I've always admired runners. To me, running was a grueling sport that I couldn't for the life of me find any enjoyment in. My asthma made it hard to breath, my knees would give out, and/or the cramps from probable dehydration all made running so incredibly unappealing. How then were there all these people I knew running for the fun of it? Running to stay in shape? Running because it made them feel good? It was an incredible notion and again, one that I've always admired. Yes, there are so many other highly demanding sports, but there's just something about running: it's not only a game of endurance, but a mental battle. In running, the only opponent is you and your surroundings; your fate is in your own hands.

So after living in Hawaii for a couple years I decided to try something I had never done: I went out, bought a pair of some cheap Asics, and decided to start running. And immediately I was let down. At most I could run 15 minutes before either my esophagus began to close so tightly that I needed my emergency inhaler, or my knees gave out. The next day and for the week following my knees were always in such agony that I thought it was possible I had busted a tendon or kneecap (a friend of mine even performed acupuncture to help ease the pain). On top of that, I felt so heavy and goofy running that I was certain I was doing it all wrong. But, I kept it up...every two weeks or so I'd somehow persuade myself that I needed to get outside and run. Then I would suffer the consequences of my asthma and knees again. I continued like that for a while: running, suffering, running, suffering... A vicious cycle. I had dreams of someday running the Xterra Trail Run in the Ko'olau Mountains, but at the rate I was going at...I had a better chance of learning the ancient Hawaiian art of Wind Jumping (btw, I swear that's a real thing: my Hawaiian Studies professor was doing research on it)....

When I met Aron, I was even more inspired to run. Here was this guy, a former Swiss National Triathlete going on 4-5 hour runs a couple times a week for the fun of it! After telling him about my running problems, he suggested I get a better pair of shoes (unfortunately he couldn't help the asthma thing). So, over Christmas of last year, I went into the local running shoe store and spent a little over an hour talking with the sales associate about my knee problems. He put me on this little board thing that apparently told him about my feet. I don't remember what he said exactly, but he pointed me towards two different pairs of shoes: the Asics Kayano and some other brand...So, I dropped $120 for a brand new pair of shoes that, according to Asics and the salesman at the store, would be the solution to all my knee problems.

Was it possible that my knees were hurting even more? No effing way! I spent how much money on these non-refundable shoes that were supposed to do wonders for me, but really made me feel as if I had downgraded. Not only was I pissed, but I was very much disheartened. After that, my brand new high-tech running shoes were used once for hiking (which also left my knees swollen and pained). Though I didn't completely give up on the dream, I was beginning to tell myself that perhaps I wasn't meant to run. After all, I'm a tall girl and apparently tallness equals knee problems (or so I'm told). I went back to my yoga and decided that if I couldn't run, at least I had mad flexibility on my side.

And then, the magic happened.

In March, my roommate who was an avid runner herself, bough a pair of Vibram Five Fingers, after being hounded by her brother, his girlfriend, and his friend to try them out. She was instantly in love with the shoes and would come home from her runs telling me and our other roommates just how incredible the shoes made her feel. After doing a little research on Vibrams and the barefoot running movement, I was definitely intrigued, but didn't want to drop another hundred on shoes that potentially wouldn't work for me. So, she let me try hers out.

For the first time since I had started up my running campaign, I was running....and running....and running. I ran a total of 20 minutes without any pain at all in my knees. When my feet hit the ground, I felt light, and controlled, nothing like how I had felt with conventional shoes. From the "first impression" run, I was sold. However, the deciding factor would be how my knees felt the next day. And surprisingly, they were totally and completely fine. No pain. No swelling. No difficulty walking. Nada. Well with my knees that is. My calves on the other hand were sore as hell. That's to be expected though when transitioning into "barefoot" running. The following week, I went out and bought my own pair of Vibrams.

Since that first run in March my running capabilities have sky-rocketed. It wasn't until June though that I decided to get serious and make a commitment: By September, I wanted to complete a half-marathon without stopping. Since running with the Vibrams, my entire outlook on the sport had changed. Could it possibly be that I was ACTUALLY enjoying it? Ho la vache! By mid-August I had come from only being able to run 15 minutes, to running a full hour and 15 minutes, in the mountains (and then after that hiking for another 45mins). It actually felt good! It started to become an outlet for me, a sense of freedom like no other. I was catching myself running through the city, forests, lake side...everywhere. It was incredible to me that my own two feet could take me to all these places! Plus I have the best running coach and partner around (who I might add is really good-looking)...When I wasn't running alone, Aron was staying by my side encouraging me to push a little harder, go a little faster, and explore a little more, even though he could have easily left me in the dust. I admit there were definitely times I thought about pushing him in the lake...but combined with his motivation and my new-found freedom, I pushed through the hard stuff. I was starting to feel like I could actually do it! Come September, I would be ready. I was going to run a half marathon!

And then tragedy struck. On a fateful morning in Germany, while visiting my sister and niece, I tripped over a cord, slamming my pinky toe into the bed frame. Immediately I knew it was bad; I looked down at my poor little toe and had to bite my tongue from screaming obscenities in front of Jezebel. Instead, I let out a sort of muffled puffing/moan of agony as my toe immediately began swelling to roughly triple its size. As I danced around red-faced and watery-eyed, Jezebel looked at me like I was a crazy, lady. 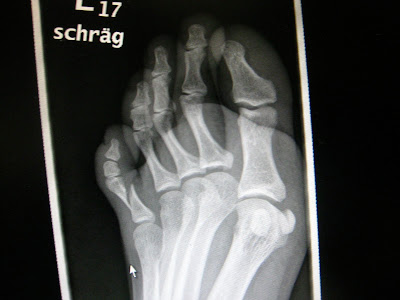 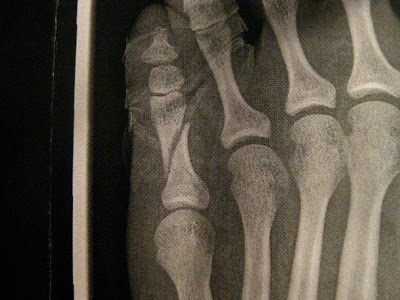 That was a little over two weeks ago. The X-Rays showed a complete break in the phalange bone that connects my pinky toe to the rest of my foot. The doctor told me she had never seen a break like mine in a pinky toe as they usually occur in the big toe. After I was sent home with crutches, and told not to apply any pressure on my foot, I couldn't help but feel totally and completely helpless. Literally because I was actually incapable of making myself food, bathing properly, and getting around really anywhere, and mentally because my half marathon dreams had come crashing down all because of a small bone in my foot. It's quite amazing actually how much we rely on all the little bones that make up our feet.

The recovery is coming along. I've basically ditched my crutches because, well they're a pain in the ass, and plus I'm doing fairly well without them. And by that I mean the pain has subsided a bit. I've been trying to get in workouts here in my room by doing some yoga, stretching, core work, etc, but the what has really surprised me about this whole ordeal is just how much I miss running. Of course it doesn't help that I've just finished an incredible book called "Born to Run," by Christopher MacDougall.
Every page made me want to drop everything I was doing, strap on my Vibrams, and head out the door...that is until I remembered I have a broken toe. I'm actually disappointed that I can't go running right now. For those that know me and understand the pain I went through before I discovered the Vibrams, they know how far along I've come. I know the title of this blog includes "Shattered Dreams," but really, my dreams haven't been shattered. That's just me being melodramatic. In all honesty, I'm just excited to get healed up and get running again, whether it be a mile down the road, or a marathon in the alps...I can't freakin' wait!