The past 24 hours have been a whirlwind of learning experiences, and I've only JUST arrived here at the farm, having yet to don a pair of work gloves. No, I'm not talking about farm-related learning (not yet at least), I'm talking about traveling, and more specifically doing so alone.

I consider myself to be a fairly-traveled person. I say "fairly" because I don't yet think that I qualify as "well-traveled." Anyway, the point is, I'm not a newbie at this, and yet the amount of rookie mistakes I've made since even before my departure is enough to tempt me into revoking my "fairly-traveled" card. Yikes.

It started with the packing. Typically, I'm the person who has lists made and bags packed at least a week in advance before a big trip. This time however, as I was smack-dab in the middle of exams for university, I found myself scrambling at the last minute to even think of what I needed. "I'm WWOOFing," I told myself. "I'm gonna get dirty." Which lead to me overpacking, and a friend subsequently advising me that, instead of taking 10 pairs of everything, just....you know, wash them. Duh. So I took his advice which lightened up my pack ever so slightly.

Second blunder: not paying close enough attention to the fine print on my tickets. As a frequent user of the Swiss train system, I just assumed that travel in Italy would be the same: buy ticket online, print out the order confirmation and go.

I got a real scolding from the conductor as we left Geneva. He even threatened that I pay for a new ticket or get off in Lausanne. After breaking down in hysterics and explaining that I just finished exams week, he found a bit of compassion for me and I managed to escape a hefty fine or worse: no vacation at all. A similar incident happened on my last leg of train-hopping in Firenze. By this time I was running off of a little less than 2 hours of sleep, and had abandoned all aspiration of making the 19km trip to Vaglia by bike. So with the help of an agent, I bought my tickets. However, she failed to inform me of the very important next step: having your ticket "validated" by a ticket-punching machine (seriously, what's the point?). Of course, me having no idea, hopped straight onto the train only to have the conductor scold me yet again. "First time riding train in Italy?" he demanded through his thick Italian accent. "Si, prima...uhh, first time, yes." He proceeded to ask me another three times if it REALLY was my first time (at least I LOOK like a seasoned traveler, ha!), and after much assurance that it indeed was, he left me off with just a warning, leaving me to escape yet another fine.

Several other things in concession managed to make the first 24 hours of this trip a bit of a nightmare. I managed to get completely lost in Milano around 11:30pm, riding around on my bike with my over-stuffed pack (on the upside though, I got to see some beautiful places I would have otherwise missed).  Being without iPhone nor GPS, I printed out a Google Maps itinerary ahead of time, but I ended up abandoning it after I realized it was taking me in the wrong direction. I opted to ask for help instead

At check-in to my hostel, I learned that they had overbooked and therefore placed me on a mattress on the floor. The mattress was comfy enough, but the team of half-naked rugby players snoring and farting from the neighboring beds managed to keep me from any sort of sound sleep. Looking back at this incident, I'm a little peeved with myself for not having demanded a bigger refund.

Lastly, and I know this sounds very "city" of me to say this, but I wish I would have known that the 5km from the main road to the farm is an unmaintained gravel road, pocketed by holes and miniature boulders. When I told the family that I would be bringing my bike to use during my free time, they must have assumed that I was bringing a mountain bike because unless I'd like to learn to fly like Superman, there's no way my little road bike can make it down the mountain. Had I had known this, I would have opted to leave Bumblebee at home.


But none of that matters anymore because I've arrived! I'll be spending the following week on this lovely little farm tucked away in the Tuscan valley, where I'm hoping to "get back to basics" so to speak, and find a bit of silence. After only a few hours here, I think I should be able to manage. 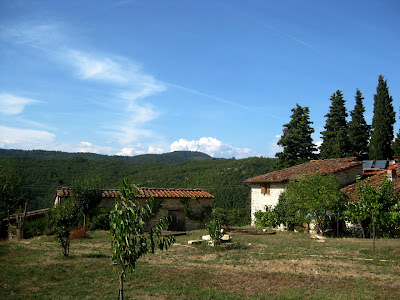 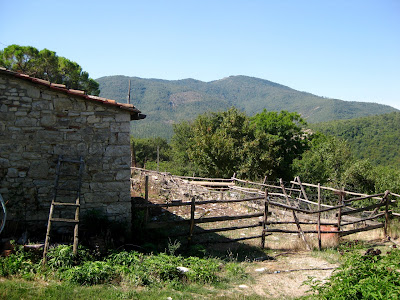 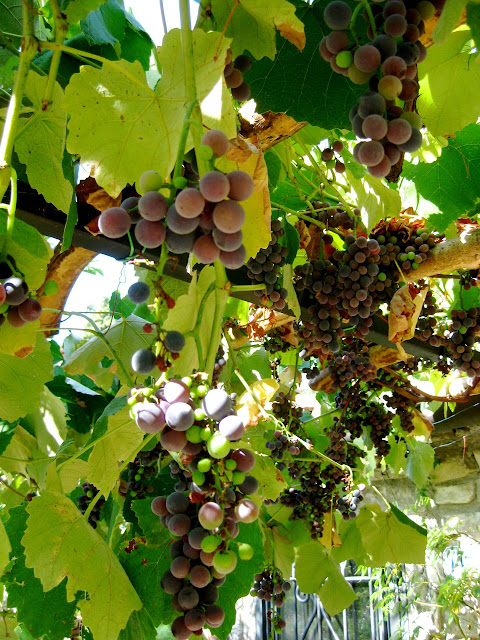